Joseph De Sena, 46, has been an entrepreneur since his pre-teen years. From selling fireworks at age eight, to starting a t-shirt business in high school, to building a multimillion-dollar pool business in college, to creating a trading firm on Wall Street, De Sena is a living definition of the word “entrepreneur.” 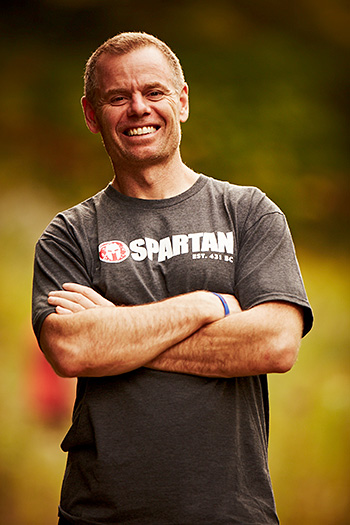 Joe’s message of inspiration and personal transformation, combined with his status as an author on the New York Times Best Seller list makes him a popular speaker for a variety of business groups, including Pepperidge Farms, the Association of Corporate Growth (twice), Florida Venture Forum, and the independent TedXBeaconStreet.

A full-time resident of Pittsfield, Vermont, Joe De Sena knows what it feels like to succeed outside the office – and that’s the feeling he seeks to bring to the world’s athletes with the Reebok Spartan Race series. Throughout his life, he competed in any extreme sports adventure he could find, testing his mental and physical endurance against nature.

Joe turned an interest in endurance racing into a passion. His racing resume is the stuff of legend – over 50 ultra-events overall and 14 Ironman events in one year alone. Most of his races are 100 miles or more with a few traditional marathons in the mix.

To put it in perspective, he raced the Vermont 100, the Lake Placid Ironman and the Badwater Ultramarathon…in one week. The elevation climb for the 135-mile Badwater race, which starts hundreds of feet below sea level in Death Valley, is over 8,500 feet up to Mt. Whitney and temperatures soar into the 120’s. Joe also biked cross-country in the Furnace Creek 508 which has been coined “The Toughest 48 Hours in Sport.”

Joe’s other athletic achievements include:

De Sena’s prescription for life’s insurmountable obstacles is to get off the couch and crush them through hard work and force of will.

In high school ran the one and two-mile in track and field, competed in cross country and soccer and was captain of his wrestling team. He briefly wrestled at the University of Delaware. His other athletic accomplishments include running the Honolulu Marathon, Oahu Perimeter Run, Army 10-Miler, Sound to Narrows and numerous other endurance races. He has competed in DoD-level Bench Press Competition. Colonel Nye has a Bachelor of Science degree in Criminal Justice and two Master’s degrees for Strategic Planning and Military Science.

Frank Grippe recently retired from the United States Army after 34 years of service. He has been a four season outdoor sports enthusiast since his youth and presently resides on the south-central periphery of the Adirondack Mountains.

Frank attended two Outward Bound Courses as a teenager and joined the U.S. Army after high school. He served as an Infantryman his entire career, primarily with Ranger and Paratrooper units. Frank’s career took him around the world with an emphasis on the Americas, Asia and the Middle East. His combat operations have included a 500-foot nighttime parachute assault under fire into Panama to participating in direct action missions in Afghanistan as recently as last year. Frank’s first and final combat action was conducted as a member (and then participating observer) within the 2nd Ranger Battalion. His career path reads Rifleman to Command Senior Enlisted Leader of the United States Central Command.

The Obstacle Course and Extreme Outdoor Events have been a part of Frank’s life since childhood. He is an advocate of the Mind, Body, Spirit, and Community Life Style Discipline.
Frank is Proud and quite humbled to be invited to join the ranks of Team Spartan.

Charles is a retired third generation decorated Law Enforcement Officer, FBI trained Hostage Negotiator. After graduating high school, Charles worked as a Nationally Registered Emergency Medical Technician (NREMT) and then trained as a Paramedic at Northeastern University. He entered Law Enforcement in 1994 and served over 14 years in various positions including patrol, narcotics investigation, and as a FBI trained hostage negotiator. Charles was trained in Basic and Advanced Narcotics Investigation by the Drug Enforcement Agency (DEA) and Massachusetts State Police. In addition to attending Northeastern University, Charles attended Syracuse University before working for the Massachusetts House of Representatives and Senate.

Charles retired as a highly decorated officer in 2009 and now lives in Pittsfield, Vermont where he serves the community in various capacities, working as the Communications Officer for a local Search and Rescue Team.

Tony Matesi, 29, is the creator of the Hurricane Heat Twelve Hour, and has been a force in the Obstacle Racing scene as an athlete and blogger since 2009. After graduating from the University of Illinois at Chicago with a B.S. in Entrepreneurship and a Minor in Marketing, he went on to earn a Master’s degree in Public Relations and Advertising from DePaul University. Soon after graduate school while helping launch multiple start-up businesses, he competed in some of the most grueling endurance races offered in the United States. The experience inspired him to start his own 24 hour adventure race.

Tony pitched his race and ideas to Joe De Sena, which later became the Hurricane Heat 12 Hour and led him to his position at Spartan as the Director of the Hurricane Heat. His background and education in marketing and love for a lifestyle that encourages pushing his athletic and creative limits landed him in the concurrent position of Managing Editor of the Spartan Magazine and Blog. In addition to his work with Spartan Race Tony has been a contributor in the operations of multiple 50+ hour endurance races since 2013.